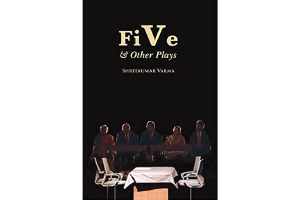 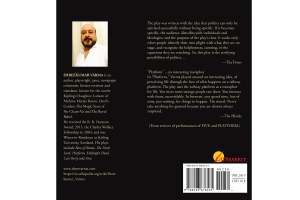 Shreekumar Varma's first collection of plays: FiVe, SISTERS, and PLATFORM. FIVE is a thriller. It takes you to the heart of the country’s power struggles where life and death depend on the whims of the winner! FIVE is about democracy. Under our present system of elections and nominations, anyone could come and rule us. A dark comedy that could become terrifyingly real! The story of one unfortunate man, Jaggu, who is catapulted to the top; two politicians who don’t know what hit them; a power-drunk puppeteer, his earnest wife and his scheming friend; a bright young TV anchor trying to see through the chaos; and Five, a shadowy bunch that’s ruling the country. FIVE is a horror story in which you and I could be participants one day! P L A T F O R M: Random, yet linkable, scenes on a railway platform showing the quirkiness and unpredictability of life. Here there are always two sides to the same face, the exploited and the exploiter, the shrewd and the innocent, the actor and the witness. During intervals between our compulsive journeys, we pause on an unknown platform to seek meaning for what we do, for what we are. You turn around and see the most familiar faces, but the people who own them turn out to be strangers. You walk into a platform or compartment and get hit by a thudding sense of déjà vu. There is always a thrill of danger, you never know what will happen next. SISTERS: Three scenes set in three cities with three characters. Are they the same characters each time? The man seems to be the same, journeying through time in reverse, running into two sisters again and again: Two old Mylapore ladies wounded by life. Two middle-aged hospital nurses in the middle of Kochi’s political turmoil. Two young sisters from a convent in Goa caught between reverence and irreverence. The painting of a nude catches their eye and deflects them from spirituality for a happy moment or two. It’s simple. Everything may change. Time, Place, Context. But people are people.